LAKEWOOD, Colo., May 19, 2022 /CNW/ - Energy Fuels Inc. (NYSE American: UUUU) (TSX: EFR) ("Energy Fuels" or the "Company") is pleased to announce that it has entered into binding agreements (the "Purchase Agreements") to acquire seventeen (17) mineral concessions (the "Transaction") between the towns of Prado and Caravelas in the State of Bahia, Brazil totaling 15,089.71 hectares (approximately 37,300 acres or 58.3 square miles) (the "Bahia Project").

Based on significant historical drilling performed to date, it is believed that the Bahia Project holds significant quantities of heavy minerals, including monazite, that will feed Energy Fuels' quickly emerging U.S.-based rare earth element ("REE") supply chain. The Bahia Project has seen no previous mining, but several of the concessions have valid exploration and mining permits with the Government of Brazil. Therefore, the Company believes there is a clear path to moving the Bahia Project to production.

The Bahia Project is a well-known heavy mineral sand ("HMS") deposit with over 3,300 vertical historic exploration auger holes drilled to date, indicating significant concentrations of titanium (ilmenite and rutile), zirconium (zircon), and rare earth elements (monazite). Importantly, the mineralization is at or near the surface, meaning the material is expected to be relatively easy to recover using standard, low-cost sand mining techniques, including the use of front-end loaders, excavators and/or dredges. Due to the drilling method used historically, drilling performed to date only averages 5.86 meters deep, or the average depth of the water table in the region. There is no reason to believe that mineralization stops at the water table. Therefore, the Company believes mineralization is open at depth. Energy Fuels' primary interest is in the monazite which contains both rare earth elements and uranium. Preliminary assay data indicates the monazite sand contained in the HMS concentrate ranges between 0.62% and 12.82%1, and the uranium contained in the monazite is expected to be comparable to typical Colorado Plateau uranium deposits. 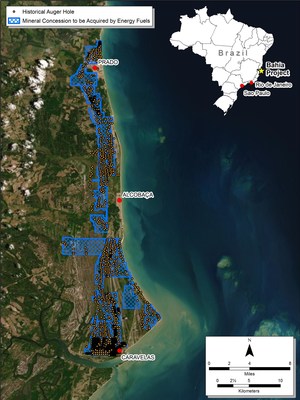 Energy Fuels plans to perform extensive exploration work over the next six months to further define and quantify the HMS resource at the Bahia Project. This is expected to include a comprehensive sonic drilling and geophysical mapping program to define the HMS grades and depths for the various mineral products, including the REE resources associated with the Bahia Project. The Company plans to engage industry leaders in mineral processing to complete a Preliminary Economic Assessment under NI 43-101 (Canada) and an Initial Assessment under SK-1300 (US) during late Q1 or early Q2 2023.

Based on preliminary, historical resource estimates, the Company believes the Bahia Project has the potential to supply approximately 3,000 – 10,000 tonnes per year of monazite sand concentrate to the Mill (depending on production rates), containing approximately 1,500 – 5,000 tonnes of total rare earth oxides ("TREO") per year, potentially for decades. The Company expects to mine and produce an HMS concentrate at the site, which contains all the valuable minerals, including monazite. This HMS concentrate would then be shipped to an existing HMS facility for further refinement and separation of the monazite into a product Energy Fuels can process at the Mill. The Company is evaluating whether this further refinement and separation step could potentially be performed in Brazil. However at this time, the Company plans to ship lower concentrations of monazite sand for concentration at a U.S. facility. Preliminary internal projections indicate this latter option can be very cost-effective, despite the larger shipping quantities, as the less concentrated material will not require the more expensive Class 7 designation applicable to higher concentrated materials, and it can be shipped in bulk.

Mark S. Chalmers, President and CEO of Energy Fuels stated: "This is another very significant step in Energy Fuels' development as a major global rare earth element producer based in the United States. We are aggressively seeking to expand our monazite sand feeds. With guidance from our heavy mineral sand experts, the Company has been evaluating the acquisition of monazite-bearing projects. The Bahia deposit is well-known throughout the HMS industry as having excellent potential to produce high-quality ilmenite, rutile, and zircon products, in addition to monazite. We are very pleased to have secured this project, as it has the potential to provide Energy Fuels with our own low-cost source of monazite feed that we fully control. The Company expects to supplement its monazite supply in the future with open market purchases, arrangements with existing monazite producers, and/or additional acquisitions. Energy Fuels is in advanced discussions with other current and future monazite producers around the world to provide creative options on how to best build upon our momentum and add further scale.

"At Energy Fuels, we have proven our ability to process natural monazite sand concentrate into a high purity mixed rare earth carbonate, containing about 32% - 34% neodymium/praseodymium (NdPr). Our clear current priorities are to continue to build our book of monazite feed to a world scale and to leverage our existing solvent extraction experience and infrastructure at the Mill to produce both separated 'light' and 'heavy' rare earth oxides, and other products, by adding commercial separation capabilities to the Mill. To achieve these ambitious goals, we have assembled a team of rare earth heavy-weights, including Neo Performance Materials, Carester SAS, and other heavy mineral sand and rare earth experts, that we believe is unmatched anywhere in the world.

"In my view, this acquisition will provide significant credibility to investors, other monazite suppliers, and clean energy manufacturers, as we will clearly demonstrate that Energy Fuels is well on its way to becoming a large-scale producer of advanced rare earth materials in the U.S. We have already proven our processing capabilities. Now, we are proving that upon successful completion of this acquisition, we will own and control 'the elements' to supply EV, renewable energy and other technology manufacturers."

Under the Transaction, Energy Fuels has entered into Purchase Agreements with private mineral rights holders in Brazil to acquire seventeen (17) heavy mineral sand concessions comprising the Bahia Project, subject to a 90-day due diligence period. The total consideration for this acquisition is $27,500,000 in cash, with non-refundable deposits totaling $2,750,000 cash due on signing, and additional non-refundable deposits totaling $2,850,000 cash due at various benchmarks during the due diligence period, and the remaining $21,900,000 due at closing. Closing is expected to follow the 90-day due diligence period and is subject to Energy Fuels being satisfied with its due diligence investigations. The Purchase Agreements contain other customary terms and conditions for a transaction of this nature.

Energy Fuels is a leading U.S.-based uranium mining company, supplying U3O8 to major nuclear utilities. Energy Fuels also produces vanadium from certain of its projects, as market conditions warrant, and is ramping up commercial-scale production of REE carbonate. Its corporate offices are in Lakewood, Colorado, near Denver, and all its assets and employees are in the United States. Energy Fuels holds three of America's key uranium production centers: the White Mesa Mill in Utah, the Nichols Ranch in-situ recovery ("ISR") Project in Wyoming, and the Alta Mesa ISR Project in Texas. The White Mesa Mill is the only conventional uranium mill operating in the U.S. today, has a licensed capacity of over 8 million pounds of U3O8 per year, has the ability to produce vanadium when market conditions warrant, as well as REE carbonate from various uranium-bearing ores. The Nichols Ranch ISR Project is on standby and has a licensed capacity of 2 million pounds of U3O8 per year. The Alta Mesa ISR Project is also on standby and has a licensed capacity of 1.5 million pounds of U3O8 per year. In addition to the above production facilities, Energy Fuels also has one of the largest NI 43-101 compliant uranium resource portfolios in the U.S. and several uranium and uranium/vanadium mining projects on standby and in various stages of permitting and development. The primary trading market for Energy Fuels' common shares is the NYSE American under the trading symbol "UUUU," and the Company's common shares are also listed on the Toronto Stock Exchange under the trading symbol "EFR." Energy Fuels' website is www.energyfuels.com.

Daniel Kapostasy, P.G., Director of Technical Services for Energy Fuels, is a Qualified Person as defined by Canadian National Instrument 43-101 and has reviewed and approved the technical disclosure contained in this news release, including sampling, analytical, and test data underlying such disclosure.

1 This information comes from 16 different Exploration Reports filed with the Brazilian Government's National Agency of Minerals (ANM) over several years (2011-2019). These grades should be considered conceptual in nature since there has been insufficient exploration to define a mineral resource and it is uncertain if further exploration will result in the target being delineated as a mineral resource. The data was obtained by sampling 1-meter intervals from a hand auger hole, separating out the heavy mineral fraction using heavy liquids, separating the heavy minerals by magnetic strength and then point counting the minerals under a microscope. Energy Fuels plans to initiate a sonic drill program to better define the exploration target and use industry best practices to determine an estimate of all the heavy minerals found within the project area. A qualified person has not done sufficient work to classify this historical estimate as current and Energy Fuels is not treating this historical estimate as current.

For further information: ENERGY FUELS: Curtis Moore - VP of Marketing & Corporate Development, (303) 974-2154
Sign up for Alerts
By clicking “Submit”, you are consenting to receive email updates, press releases, invitations, and other electronic messages from Energy Fuels Inc. You may withdraw your consent at any time by contacting us.