LAKEWOOD, CO, Dec. 28, 2016 /CNW/ - Energy Fuels Inc. (NYSE MKT: UUUU; TSX: EFR) ("Energy Fuels" or the "Company"), a leading producer of uranium in the United States, is pleased to announce that it has intercepted additional high-grade areas of uranium mineralization at its Canyon Mine, a fully-permitted conventional underground mine being developed in northern Arizona.  These new intercepts, including 28.5 feet of mineralization with an average grade of 2.41% eU3O8, further expand the mineralized zone at the mine.  While dynamic in nature, the image depicts the current uranium envelope (at greater than 0.15% eU3O8), along with the status of the 8' x 20' production shaft currently being constructed at the Canyon Mine. 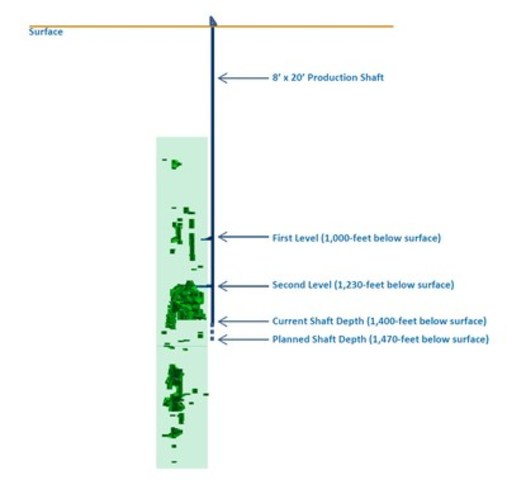 The Company previously announced drilling results from the first mine level (1,000 feet below surface) in August and October 2016, including the discovery of high-grade copper.  Drilling from the second mine level (1,230 feet below surface) started in November 2016, and to date 5,922 feet of drilling has been completed in a total of 35 holes (25 percussion and 10 core holes) up to the current pause during the Holidays.  On January 3rd, core drilling is expected to resume, and the Company plans to drill approximately 11,000 additional feet in the New Year.

This news release focusses solely on certain eU3O8 results gathered through gamma analysis.  Sampling and analysis is also ongoing for the latest core drill holes, and the Company expects to report on those results, including uranium, copper, and silver mineralization, later in January 2017.  The Company is currently awaiting assay results for over 860 samples, representing two- and four-foot core intercepts, taken from both the first and second mine levels.  The assay analysis is being performed at the Company's White Mesa Mill near Blanding, Utah, with a portion of these samples being verified by an independent third-party laboratory.  The Company is also evaluating the potential to process copper and silver mineralization currently being identified in the deposit into marketable products at the White Mesa Mill, as co-products of uranium recovery.

Gamma analysis from the current round of drilling at the Canyon Mine continues to confirm and expand the zones of known uranium mineralization in the deposit.  The Company believes that drilling completed to date has expanded the envelope and increased the tonnage of the mineralization over what is described in the existing technical report from 2012.  In addition to being larger than previously expected, the deposit is also appearing to be more continuous as underground drilling advances.  These drilling results continue to increase the Company's level of confidence that production costs from the Canyon Mine have the potential to be low-cost and competitive with the best underground uranium mines globally, including mines in Canada, based on industry-published cost estimates.  In addition, the possibility of recovering copper and silver as co-products of uranium recovery has the potential to make the economics of the Canyon Mine even better.

The Company expects to file a new technical report in accordance with Canadian National Instrument 43-101 – Standards for Disclosure for Mineral Projects ("NI 43-101") in mid-2017 describing the uranium mineralization, and potentially copper and silver mineralization.

On August 18, 2016, the Company reported ten (10) individual high-grade uranium intercepts drilled from the first mine level (1,000 feet below the surface).  The table below summarizes ten (10) additional high-grade intercepts.

All holes were logged for gamma by trained Company personnel to calculate eU3O8%.  Gamma logging tools were calibrated prior to the drilling program and verified by an independent 3rd party geophysicist.  All mineralized core samples are also in process of being analyzed at the Company's White Mesa Mill laboratory for further verification.

Stephen P. Antony, President and CEO of Energy Fuels stated: "We continue to see excellent results from the underground drilling programs at the Canyon Mine, which is the highest-grade uranium project being developed in the U.S. today.  The uranium grades, thicknesses, and continuities we have encountered so far are continuing to confirm our high expectations for the deposit.  As we extend core holes beyond the known zones of mineralization, we are identifying new areas of high-grade uranium and copper mineralization.  As a result, we believe we are expanding the size of the deposit, including the tonnage that we expect to mine.  The Canyon Mine enjoys other important advantages as well.  It is fully licensed and permitted.  It is at a very advanced stage of construction, with all surface development completed and the production shaft nearing completion.  The mine is located within trucking distance of our White Mesa uranium mill, which is licensed, operating, and has the capacity to process the Canyon material into finished uranium concentrate.  Finally, as we previously announced in October, we are identifying substantial areas of high-grade copper mineralization.  If we are able to monetize the copper, the economics for the Canyon mine could improve significantly.

"We have recently observed some small improvements in uranium prices, and U.S. government policies seem to be turning in favor of U.S. nuclear energy and uranium production.  The Canyon Mine is expected to be an important aspect of Energy Fuels' near- and mid-term uranium production, in addition to our ongoing production from the Nichols Ranch ISR Project in Wyoming and the potential to place our Alta Mesa ISR Project back into production in Texas.  We look forward to providing more updates on the uranium, copper and silver mineralization at the Canyon Mine as the drill program advances."

About Energy Fuels:  Energy Fuels is a leading integrated US-based uranium mining company, supplying U3O8 to major nuclear utilities.  Energy Fuels holds three of America's key uranium production centers, the White Mesa Mill in Utah, the Nichols Ranch Processing Facility in Wyoming, and the Alta Mesa Project in Texas.  The White Mesa Mill is the only conventional uranium mill operating in the U.S. today and has a licensed capacity of over 8 million pounds of U3O8 per year.  The Nichols Ranch Processing Facility is an ISR production center with a licensed capacity of 2 million pounds of U3O8 per year.  Alta Mesa is an ISR production center currently on care and maintenance.  Energy Fuels also has the largest NI 43-101 compliant uranium resource portfolio in the U.S. among producers, and uranium mining projects located in a number of Western U.S. states, including one producing ISR project, mines on standby, and mineral properties in various stages of permitting and development.  The Company also produces vanadium as a co-product of its uranium production form certain of its mines on the Colorado Plateau, as market conditions warrant.  The Company's common shares are listed on the NYSE MKT under the trading symbol "UUUU", and on the Toronto Stock Exchange under the trading symbol "EFR".

Stephen P. Antony, P.E., President & CEO of Energy Fuels, is a Qualified Person as defined by Canadian National Instrument 43-101 and has reviewed and approved the technical disclosure contained in this news release, including sampling, analytical, and test data underlying such disclosure.

For further information: Energy Fuels Inc., Curtis Moore - VP - Marketing & Corporate Development, (303) 974-2140 or Toll free: (888) 864-2125, investorinfo@energyfuels.com, www.energyfuels.com
Sign up for Alerts
By clicking “Submit”, you are consenting to receive email updates, press releases, invitations, and other electronic messages from Energy Fuels Inc. You may withdraw your consent at any time by contacting us.